The Teachers Who Saved Us 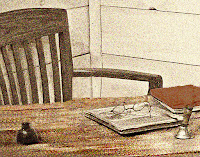 I was one of several consultants conducting district workshops on a Saturday; I was with a group of teachers who weren't very happy to be there. Maybe because it was a Saturday; maybe because the topic was something with which they already felt somewhat familiar.
I just wrote about Angela Duckworth's research on grit and some of the responses to her research and her book. I'm not alone in finding this a topic worth discussing. Well on this particular Saturday, one of the videos in the deck was Duckworth's TED Talk. I had to be a bit gritty to show the video to that particular group of predominantly African American teachers whose students often arrive at school hungry and whose lives outside of school are, at the very least, difficult.
Yesterday I read a story about a New York principal who showed some grit when she was inspired by one of her own students. The New York Post article is here, but you can also find two 2015 versions of the story by The Atlantic and by PBS. Let me tell you: that's one amazing woman, and she has grit. Yes, she has talent, but there is one line in The Atlantic video that made me catch my breath. "I tell my teachers all the time that we are chosen to be here because we're supposed to transform a community that doesn't believe in themselves."
To do that work day in and day out, especially without the spotlight of television cameras or the attention of journalists and daytime talk show hosts, requires grit. But here's a bit that's lost in the story about Ms. Lopez: Vidal Chastanet. Yes, that student got a scholarship, but that might not have happened were it not for the chance encounter that prompted him to answer a question about who has influenced him the most. As Ms. Lopez says in The Atlantic video, Vidal could have named a family member, but he chose to name his principal.
When I was meeting with those teachers on that Saturday, and we were talking about grit, about helping kids become #futureready, about how important yet hard it is to create a safe space for kids knowing the situations from which many of them come and to which many of them return. We know we can't do much for them outside of the time they are in our care, but during that time. . .
And so we talked about the teachers who saved us and how rare it is that those teachers ever know. An astonishing number of us grew up in abusive households. Many students survive varying levels of poverty, chronically difficult family situations, and more. Those of us who manage to get through school, even go to college and carry on to have reasonably productive lives can probably point to an educator and say, "That teacher saved my life."
In my case, there were a few teachers. Miss Gibson, my 4th grade teacher, who took no nonsense and insisted we take care of our things, but had a heart-gripping compassionate side to her. I remember the day she came to my house after I'd gotten sick. I distinctly remember being awed that she would bother to do that for someone like me. Then in 7th grade it was Mrs. Moen whose influence continued into 8th grade. In high school, probably when I needed them the most, again, it was Mrs. Hawkins and Mrs. Gamble. They each invested in me in different ways, but they invested in me and clearly believed in me when I did not or could not. My life out of the classroom didn't enter into anything because the classroom was the only space they could influence. And they did so by insisting I be my best self, and then helping me, in ways they cannot imagine, to become my best self.
Here's an example. Mrs. Hawkins, one of my English teachers, returned a paper to me. She put it on the desk and tapped it with her finger as she looked at me until I looked her in the eye. Then all she said was this: "I know you can do better than this."
Daniel Engber of Slate titled his review of Duckworth's book "Is 'Grit' Really the Key to Success?" I was intrigued by Engber's closing remarks as well as his initial question.
In education we talk a lot about student success, but we are terrifically inconsistent when it comes to offering any clarity about what we mean by "success." Grades? Proficiency or mastery of the standards? Creativity? Collaboration? Critical thinking? Problem solving? What if I'm a student with loads of creativity, can demonstrate mad problem solving and critical thinking skills but barely push past a C. Am I successful?
Duckworth offers some steps for exhibiting grit successfully, and it is these to which Engber alludes in his closing sentences: "If you want to win forever on the football field, or join the military, or write a book about a big idea, then it might be best to stay on target, compete in everything, and finish strong. But others find their path through mindful wavering and steer away from simple answers." Sweet bit of snark in that last phrase, by the way.
So here is my big takeaway from Duckworth's TED talk: "Failure is not a permanent condition." Sure, I got a D in Foundations of Math I in college and I got that D because, once again, a teacher invested in me and coached and coaxed me across that finish line. I was never so proud of a grade because yes, I stayed focused and finished strong, so I did well enough to pull my grade up to a D. What's so amusing is that many years later I taught math. Because I am a reformed mathphobe and because I'd done poorly in college (and high school) math, I understood my students' anxiety.

Teachers saved me. In every sense of the word. And they saved me because they believed in me, because they saw something I couldn't, because they would not let me quit. Because they coaxed, encouraged, and sometimes even badgered me into keep trying and to try harder. They willed me to be gritty.
I learned valuable lessons from those teachers, the least of which is the importance of not giving up and that failure is not a permanent condition. Was I successful with that D in college math? You bet I was.
Posted by ejroberts at 7:30 AM No comments:

This isn't a new topic. George Couros raised it in his blog post Pedagogy Before Technology? He wondered if the absence of the word "learning" in the definition of "pedagogy" might be an issue. Pedagogy, after all, is about teaching.

In the past several months, and perhaps longer, I've developed a particular twitch when educators focus only on their teaching. When talking with administrators about observing the teacher in the classroom, I've received puzzled looks when I've asked what they observed about students learning while the teacher was doing his or her thing. I've managed not to ask what might be an obvious question: "If a teacher teaches and there are no students in the classroom, is learning taking place?"
After all, as George suggests, education isn't just about teaching. I might be delivering a great lesson and doing it really well, but if my students are just going through motions and not actually learning, well, I haven't done my job.

I'm a fan of thinking first about pedagogy, but that doesn't mean that pedagogy remains at the forefront at all times. In my work with educators, it is inevitable that someone will say, "Well, that won't work with my students." Whether we're talking about an instructional strategy, an approach to building a lesson, some sort of technology resources, or anything else, there are teachers who flatly reject something because they think it won't work with their students.

Now I know that this is often code for "this is too complicated/hard/confusing for me so I'll blame my kids," but I've also had teachers who have gone on to explain why the thing is a problem for his or her class. As we've talked, we've usually found ways to adapt or modify the thing, but the point is the teacher was thinking first and foremost of her students.

The teachers who are thinking about their students and their students learning, don't think first of pedagogy and then of technology. For many of them, there is no real differentiation as they think about various instructional strategies and resources, selecting some and discarding others.

Now that is not to say there aren't those who find a new tech toy and want to figure out how to integrate, and often because they want to play with the toy. I've been guilty of that, but even as I think about the new tech gadget or resource, I think about how it will help my students learn or how it will help move the engagement needle. There have been plenty of times I've had to set aside my new toy with great reluctance because I just couldn't find a relevant way to integrate it. However, as a result of that process, I learned more about the way I might use that technology and thought through the possibilities which meant I was that much further ahead for the occasion it was going to make sense. . .for the students.
Posted by ejroberts at 7:55 PM No comments: