"Form follows function" is an axiom in architectural circles. Those of us outside of that circle can try to parse its meaning, but let's just go to those who know something of Louis Sullivan. According to ThoughtCo, "Sullivan argued that a tall building's exterior design (form) should reflect the activities (functions) that take place inside the walls of the building."


Whether it be the sweeping eagle in his flight, or the open apple-blossom, the toiling work-horse, the blithe swan, the branching oak, the winding stream at its base, the drifting clouds, over all the coursing sun, form ever follows function, and this is the law. Where function does not change, form does not change… . It is the pervading law of all things organic and inorganic, of all things physical and metaphysical, of all things human and all things superhuman, of all true manifestations of the head, of the heart, of the soul, that the life is recognizable in its expression, that form ever follows function. This is the law.

The UX Collective article is actually quite fascinating, so go ahead and digress to explore that quick read. In the user interface context, the writer believes that today the credo might instead be "function follows human needs, form follows human behavior." And that is rather interesting. An example in this article is a chair and you might learn that designing a chair can be pretty complicated. 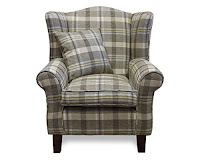 My current reading chair is a wing back armchair. It's comfortable but sometimes when I want to shift positions, I end up flinging one leg over the arm of the chair. Not good for my back; not great for the chair. Would a recliner be better? Maybe. But I'm thinking about this human behavior thing and wondering how that might impact the design of a reading chair for someone who occasionally would rather be sitting on something that's almost a chaise. Is it the sideways thing I like or just being able to put my leg or feet up? Good question and something a designer might think about.

You might be asking what on earth that has to do with office space and classrooms, but I'm guessing you're already there.

Recent articles have made it clear that the open office experiment has not been successful. According to Ars Technica, open office space is actual less conducive to collaboration and productivity. Inc. reports on the same Harvard study which indicates that face-to-face interactions increased as walls went up as did email and texts.

When I last worked in an office, we had walls. People would email to colleagues who were within a short walking distance. Why email rather than get up and walk? The perception of time saved in that I could send an email and rather than wait for a response, I could continue with other projects. . .and emails. At some point, the emails became ridiculous--even if they did provide a paper trail--and it was easier to get up and go to someone's cubicle or office, gathering others along the way, to finalize the conversation and decisions. And that's kind of my point. The email permitted us to get through some of the chaff to figure out the real issues and determine who really needed to be part of the conversation and then, after a 10-minute confab while leaning against someone's door frame, tidy up the details.

Could we have done that in an open office? I suspect not. Concerns about others eavesdropping on the conversation and offering unwanted, unneeded, or unnecessary suggestions; or others overhearing a conversation they shouldn't be overhearing. Or, for those of us who might have been trying to do other work while the conversation is happening, too much distraction because of that conversation which might or might not be relevant to me and my work. Which is why we see so many people wearing headphones and earbuds if they're working in that open space.

Does that apply to classrooms? After all, kids are in a classroom to learn. How complex is that after all?

Ahhh, well, let's think about that. What does learning look like?

I'm not going to bash the "factory model of education" that has been prevalent for the past 100 years, which is where so many like to go. That's a tired trope. While I work with some teachers who have desks in their classrooms, sometimes those desks are grouped, sometimes they're in rows, sometimes they're in a circle or rectangle. It depends on how much space they have and what's happening in class that day, though it also depends on the teacher and how willing he or she is try something different.

I often ask teachers what they think a particular lesson is going to sound like and look like. I want to know what they see in their mind's eye and what they imagine they would like to hear; I want to them to think about what that learning experience could look like and sound like.

Some teachers can't help wanting Voice Level 0 or Voice Level 1 but I suspect that's because they're more comfortable with quiet than noise. Some teachers have that eye-widening recognition of how they're constraining kids because of the vision they have for what learning should look like and be.

No, no, and no. So learning could be messy and noisy. It could be quiet and reflective. It depends on the learning.

I worked with a school that tried open classroom space for elementary students. The concept was that teachers would have a large space for team teaching and a smaller walled space for small group work, targeted student work, etc. The first challenge was the team teaching and when that didn't work quite as well as hoped, they found ways to create walls. Team teaching worked well in a couple of grades because the teachers figured it out and were okay with controlled chaos. The students adjusted for their classes. The open space for library work and some of the specials were less successful; they are still sorting out solutions.

Does learning really ramp up when form follows function? Maybe. I know a first grade teacher who gave her students choice of where and how to sit when they were reading their books. I was often amused by how students chose to sprawl or sit, but they were focused on their books. Of course, she's not the only one to give students options of choosing to stand or sit and where to sit or where to stretch out.

I've said it before and I'll say it again: pedagogy first. Cool furniture, nifty rugs and wall hangings, far out lighting, bean bag chairs, and chimes. It's all for naught if your teaching is below par. 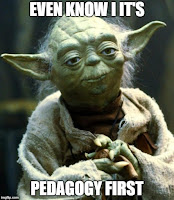 I think it's great that school architects understand how students learn--and I agree. I think some of the findings in this article are spot on. But they also have to understand that what works in one second grade classroom might not work as well in another and it might not work at all in a sixth grade classroom. There are many influencing factors and many of them are not the same across grade levels. Classroom dynamics between teacher and students. This group of students is different from last year's and next year's will be different from this group. Curricular changes. District initiatives. Parental involvement. Community involvement.

Just as I believe we shouldn't generalize how office space should work across businesses, I don't think we should generalize how classroom space can help students in their learning.

I think there are some fundamentals for classroom space: enough accessible outlets, options for teachers to store laptops or tablets so students can reach them as well, options for creating spaces so students can work individually or collaboratively, accessible white boards or smart boards for whole class instruction but also for students to use as they're figuring out their learning, options for media and technology so students can learn individually or collaboratively. The ideal, I think, is for teachers to be able to mix and match what they need for their classroom that's appropriate for their grade levels/content areas, and for how they wants to see and hear learning in their classrooms.

I know there is never enough wall space in a classroom and schools use hall space in various ways. I love the idea of grade level hallway space for posting student work (or QR codes that link to student work) as well as common anchor charts or whatever else they might need. That means kids need to be able to leave a classroom on occasion, which I do see in many schools. And then wall space in the classrooms could include a couple of smaller student-level white board for working out solutions to any kind of problem or learning task.

I also know that teachers like to set up their classrooms in specific ways based on their resources, what and how they teach, and the space they have available. I understand that and believe it makes sense. However, let's assume that function follows human needs, form follows human behavior.

I wonder what could happen if teachers paid close attention to the ways students interacted with the resources in the room, how students tried to make adjustments based on their individual instincts, and what students asked permission to do.

I wonder how teachers might opt to change the room to reflect how students were asking to be able to learn.

I also wonder how teachers might reflect on how they teach and make adjustments to their pedagogy to reflect how students were asking to be able to learn.