This started out to be a very different post. Trends and fads in education are nothing new as is the fact that political and educational culture are often influenced in odd ways by popular culture. I'd been thinking about a cultural historical view of personalization so did a smidge of research on Burger King. Back in 1974, Burger King told Americans we could have our burgers our way. And, perhaps, so it began. (BTW, in 2014 Burger King discarded the "Have It Your Way" slogan for "Be Your Way," which seems to have gone unnoticed by most of us and puzzled those who did notice it though I flirted briefly with the idea that BK was trying to build off Lady Gaga's "Born This Way" (2011) phenomenal success.)

I think about "having it our way" a lot when I encounter individuals who have particular ideas about what personalization means. I hear folks harumph about entitlement and work up to talking about back in the day when they were in school, etc. I've done that: referenced back when I was in school. But the world was different then. Very different. And what constituted work was different as were the predictors for skills, dispositions, and knowledge required for specific classifications of work which were, in themselves, far more predictable.

In a recent article, Phil Rosenthal, a writer for The Chicago Tribune, reported on the Future of Jobs analysis published by the World Economic Forum.  Rosenthal notes the report "anticipates that advances in robotics, artificial intelligence, nanotechnology, 3-D printing and biotechnology will result in a net loss of more than 5 million jobs by the end of 2020 across 15 major developed and emerging economies examined" (emphasis mine). Your first thought might be, "Okay, but that means there should be more jobs supporting all of that technology, right?" Yes, maybe 2 million. By my reckoning, that's 3 million people without jobs.

It's not just the jobs, though the jobs and potential career paths and implications for K-12 and higher education are many. It's also about what drives those changes for jobs and Roshan Choxi investigates those for TechCrunch. The drivers of change are not just technological. 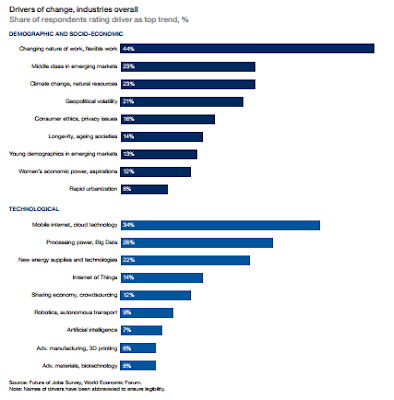 The most significant driver of demographic and socioeconomic change is how we work, which is influenced by many of the technological changes as well as how we've chosen to use the technology. Keep in mind that users are often finding ways to use technology that was part of the plan of the designers; Google Glass learned that lesson.

The report states "Our research also explicitly asked respondents about new and emerging job categories and functions that they expect to become critically important to their industry by the year 2020. Two job types stand out due to the frequency and consistency with which they were mentioned across practically all industries and geographies. The first are data analysts, which companies expect will help them make sense and derive insights from the torrent of data generated by technological disruptions" (emphasis mine).

I think about what data analysts might do with that torrent of data, provided they can manage it, provided they have any directives or context for analyzing that data. Is their objective in data analysis to make more money for the company? To help make the product or service better or safer for consumers? To find new or better ways to contribute to the improvement of our world?

As I read the report, I wondered if they and the people they surveyed and interviewed used typical categories for their thinking and for their buckets of their own data analysis; it seems so, which also seems a bit short-sighted of them, especially in thinking about the future. Now 2020 isn't all that far off, but if we take a quick glance back to see how rapidly we've seen change in some areas in the past few years and how slowly we've seen change in others, we'll likely observe there are some patches of change and disruption and lots of areas of status quo.

The barriers to change are quite fascinating, and a bit alarming.

Sixty-five percent of employers plan to "invest in reskilling current employees." Given the barriers, they seem to have little choice but to think much more creatively about how to manage current and future work options.

I think the implications for education and training are daunting. We have enough trouble implementing fairly benign change in our schools. The kinds of changes these developed and emerging economies may require will necessitate much nimbler changes in education. I imagine many organizations shunning higher education completely and building their own educational options to ensure the pipeline of potential hires has more readily accessible skills, knowledge, and expectations; in fact, many have already done so which is why we're seeing a return to and rise of apprenticeships.

But that led me to thinking about entrepreneurship, which is very much about personalization and having it your way. Which made me think of Angela Maiers and her work with Choose2Matter and Liberating Genius in our schools, which is a very positive message about students being who they are and finding their particular genius. Which made me think again of cross-curricular and trans-curricular teaching and learning. Which made me think of the controversial video posted on Facebook and likely elsewhere about what kids are learning and why, how some parents reacted to that video. Which made me think of the balance we struggle to find to teach kids what they need to know and don't yet realize they might want to know, and to find ways to let kids learn what they want to know and demonstrate the things they're learning along the way. Which made me realize that a lot of kids who are in this education incubator of personalized learning will be the ones who figure out how to manage and overcome some of these Third or Fourth Industrial Revolution barriers and will find new ways to think about work and to work in ways that we cannot possibly imagine now.

But it also makes me worry that much much for those whose options and opportunities seem more limited. We talk about the digital divide. The NETP refers to the digital use divide. We have to think, too, about the education and work skills/knowledge divide. Which made me think we have to stop fretting about new initiatives. And all of that brought me back to finding the balance between the basics (fundamentals of reading and math, critical thinking, problem solving, awareness of the social/cultural and scientific world, etc.). Too much of that can get us tied up in knots.

I've done a workshop activity called "Know What?/So What?/Now What?." I've done a variation on the protocol developed by the National School Reform Faculty. I appreciate it asks people to think about what they know, why it matters, and what they plan to do next. As we engage in short-term thinking about the future of education and its relationship to the future of jobs, we might apply that thinking. We may find it will help us organize our longer-term thinking and planning as we think about the basics, and whatever new adventures lie ahead. I think it's important we remember that whatever the future holds for us and especially for our kids will look nothing like we expect or imagine.

Posted by ejroberts at 4:55 PM No comments: