Learning about writing from writers: The problem of speculative journalism

This article, published on June 26, 2022, is a great example of what I call speculative journalism. The headline and its snapshot on Yahoo! reminds me when the editor (Scott Glenn) in The Shipping News teaches Quoyle (Kevin Spacey) how to write a headline. Yes, you might call it manipulative and in this world of getting the most clicks, that becomes of even greater importance.


Paragraph 1 begins this way: "A political shift is beginning to take hold across the U.S. as tens of thousands of suburban swing voters who helped fuel the Democratic Party's gains in recent years are becoming Republicans". The shift is stated as fact. It's a great opening sentence/paragraph because it connects directly to the headline and affirms the statement of the headline. Because it seems to be fact, it's also a good hook. It's well within the 35 words most readers seem to allow before deciding whether or not to keep reading, and is emotionally enticing enough that one might continue reading after a mental fist pump for the GOP or a possibly audible groan for the Democrats.

In the original version of the article, the second paragraph noted that 1 million voters across 43 states switched to the Republican party, which is a significantly different number than “tens of thousands.” In fact, "more-1-million-voters-switch" is part of the link to get to this article. Yet in the version of the article currently linked, we read that voter switch has occurred in 31 states.

In paragraphs 4 and 5 an individual from Colorado is highlighted and quoted. Now we learn his shift was reluctant and after he changed his registration first to libertarian, then, more recently, to the GOP.

In a previous version of this article, paragraph 6 reported that the political data firm, L2, is the source of the AP’s work and now they’ve identified “nearly 1.7 million voters who had likely(emphasis mine) switched affiliations across 42 states” so the number of voters has inched up while we lost a state. What this paragraph also tells us is “[w]hile party switching is not uncommon, the data shows a definite reversal from the period while Trump was in office, when Democrats enjoyed a slight edge in the number of party switchers nationwide.”

In the next two paragraphs, the lesson on organization and information control continues, but I'll highlight only a couple of things: 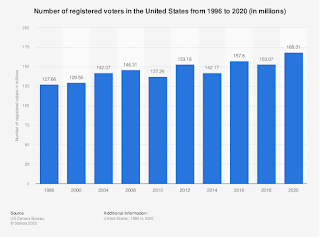 Because this post isn't about the voter switch, it's about the writing and what I might want my students to learn about writing from this article. I'll note four more things before that lesson.
First, the number of registered voters in the United States is 168.31 million. Yes, million. So "nearly 680,000 voters" is around .004 of the voting population. Barely a blip. But the number sounds big and that's the point.
Second, if you scroll down to the end of the article, there is a clarification that the article was updated on July 7 "to correct the number of voters who have switched from the Democratic Party to the GOP based on voter registration data."  Then there are a couple of lovely passive voice examples
when the publication is basically shrugging its shoulders and saying "It's not our fault." 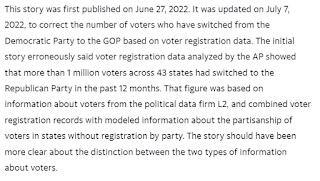 The last sentence of the clarification/disclaimer is my favorite: "The story should have been more clear about the distinction between the two types of information about voters." Not "The writers should have checked their information before we printed this." Not "The writers and the editors should have been careful to fact check themselves before we printed this." No, a nice distance as though the story is at fault.
Third, how we see an online article is different from how we see a digital version of a print article or a print article. It's not just the ads. One thing my students struggle with is that most online articles have many one-sentence paragraphs. Those are confusing because the sentences often take up more than one line and they have, I fear, learned to equate a line of text with a sentence. Ahh, punctuation. Anyway, because of the way online articles are presented to the reader, students struggle with understanding how an introduction and a conclusion work because they are battling their ways through unlearning the five-paragraph essay, which, in my opinion, should be forbidden past the 5th grade, maybe 6th grade at the latest.
Fourth, along with grammar and mechanics, structure and organization matter. Sure, writing for AP or any other publication, print or online, typically has different rules than writing for college or even for work. However, structure and organization do matter.
Every writer has to have a strong introduction with a good hook that encourages if not compels the reader to keep reading. How many sentences or paragraphs does that introduction have to be? As many as make sense for the purpose of the writing and the intended audience.
Every writer has to have a strong conclusion although online articles often simply just end because of the way they are reporting information. So these journalists aren't always worried about a thesis or making sure it is supported throughout the paper. They aren't concerned about having a call to action or clarifying their argument or any of those things students are often learning in school.
Further, journalism has different expectations for space and content. Journalists often think in column inches so they may have repetitive information from past stories or other filler to get to those column inches. That's one of the reasons my college students are told their papers will be as long as they need to be. I don't want to read filler or dreck just so a writer can get to however many pages.
There are more lessons about passive voice and style, but I want to go back to that first sentence that is stated as fact. This is the crux of speculative journalism, to me. Is there a political shift taking hold? Maybe. I don't think the writers proved their point if this is, in fact, their thesis. If this was the first sentence and paragraph of one of my student's papers, my comment might read thusly: "This could be true and you will have to provide evidence to support this assertion throughout your paper. You will have to have evidence to support your statement that there is a political shift that seems to matter and that it is among suburban voters who are changing their party affiliation. You will also have to make clear why the suburban voters seem to matter more than urban and rural voters given that your emphasis is on suburban voters."
What I need my students to understand and learn is that speculative writing is not a good source for a college paper. Sure, a student might use this article as a springboard to find other articles and information to support or amplify what is said here, but this, even though the original article is from AP, is not a good source for their academic work.
Write on.
Posted by ejroberts at 8:55 AM