Evan Robb posted this article in LinkedIn with this somewhat provocative question: "A zero allows students to not learn....any thoughts on not learning....not being an option?"

I'm often intrigued by grading policy proposals, so clicked on the link to read the article. My take is that it's not really a no-zero policy but a "I'm giving you a zero until we figure out how to avoid telling your parents you haven't done your work yet." And that's great if the students care about getting their work done and/or if there is someone at home who cares about the students completing their work.

Maybe this works well for most elementary students and even a good many middle school students, but this would be hard sell for a lot of high school students. If we're going to try a no-zero policy, let's go with "IP" the way some colleges and universities do. Let's give them an "in progress" grade.

I can imagine telling a student his grade is "in progress." He would look at me like I'm crazy because we'd both know he hasn't done much more than give the occasional thought to the fact that he hasn't done the assignment. And, if we're really honest, he's mostly been wondering why the assignment matters. Which means he's been thinking about. Sure, not in positive nor productive terms, but he has been thinking about it.

And so, if we're talking about providing opportunity and not shutting down students, I'd give him an "in progress." Then we'd talk about how he might make the assignment more relevant or connected to him, or figure out a way to get the assignment or its equivalent completed so we can all move on.

I can imagine have a conversation with a young lady who has been avoiding me because she hasn't completed an assignment. I let her know it's "in progress" because, again, I know she's been thinking about it. Her friends have been ragging on her for not getting it done or complaining about their own stress. I finally, finally get her to tell me she's having trouble because she has to look after her younger siblings because her mom keeps having to pull double shifts.

I can also imagine those kids who try to take advantage of the "in progress" policy. I know. Kids gaming the system? Sheesh. How cynical! Nope, just realistic. So here's how that goes down: Students who try to string me along with their "in progress" grade get a specific amount of time to complete their work. We've had that conversation (see the two examples above) and we've come up with a plan that the student helped design.

They've got to meet their own deadlines. And if they don't, then that "IP" becomes a zero.

I've worked with some teachers who are not allowed to give zeroes. The lowest grade they can give is 59, which is the point of failure. Okay. Fine. If that's the policy, I'll give the 59 instead of a 0, but the point is the work hasn't been completed. But I also know that if a student came to me a few days later with a completed assignment and acknowledged they blew their own deadline, I'd grade their work and change the grade accordingly. In that case, I would not penalize for lateness because they're already penalizing themselves emotionally.

Here's the other reason. If I know why the work wasn't completed in the first place, it's not that hard to confirm that information and to find out if the student is faced with an on-going situation and to try to work things out with the family. Why? Because finishing school is going to be a big step forward for some kid. And that kid who is helping babysit siblings while her mom pulls a double is going to be modeling something extraordinary if she perseveres and gets her work done, even if it's late.

And if that young man who just didn't want to do the work because he didn't see the point does the work, he learns a little something about negotiation, about completing the stuff you don't like doing because it needs to be done and maybe gets you to the stuff you'd prefer to be doing a little faster.

I remember telling a student that I really like to cook. I am not happy about cleaning up the mess I make when I cook, but I appreciate the results of my cooking. . . most of the time. Not everything is a stunning success. But I clean up my kitchen because it makes it possible to do one of the things I enjoy doing.

We have to remember that some kids think one of the greatest things in the world is to be an adult and make their own decisions. We were all there once. And we know that adulting is hard and one of the hard parts of adulting as teachers is remembering that sense, that belief that once we're adults we won't have to do all the crap that other people ask us to do. We also know that's not true, but we've learned how to manage the tasks we don't like to do and don't want to do.

That's one of the things I think "in progress" can help students learn. They can learn that not only is their work in progress, but so is their becoming an adult and learning how to manage tasks, time, and even people. In the longer view, perhaps they also learn to be less quick to give up on themselves. 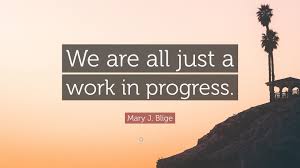 Posted by ejroberts at 4:57 PM