Thinking about majors. . . and employability

I remember talking with the parents of a freshman advisee who were worried what their student might be able to do with a degree in English. The student's dad said the word "English" like it tasted bad. I sighed, inwardly, I hope. It was not a new question and neither was the palpable concern that parents were going to be investing a lot of money in a piece of paper that would not translate to opportunities worth mentioning.

Even then, and this was over a decade ago, it was easy to tell parents about the skills their student would gain as an English major and that this learning wasn't as much about the literature he would get to read, but the work he would have to do because of the reading; because of the research; because of the writing; and, of perhaps most importantly, because of the thinking, the necessity of learning how to make connections, the requirement to articulate those ideas, and the expectation of listening to others, making connections with those ideas, and articulating any change of thought or perception. I wish I could report on the trajectory of that particular student, but, alas, I cannot. I do know that some of my English majors went on to be teachers, others went to graduate school in different fields, others went into the military, and still others found a profession and line of work that had nothing to do with English or literature and yet makes them happy.

I've been talking with teachers about their concerns about their juniors and seniors who seem to lack interest in a meaningful future and with students who respond with a shrug or with some semblance of an idea of what they might maybe kind of sort of want to focus on in college. It's hard to tell if they don't know about their options or if they don't care. One of the teachers I was talking to is alarmed that one of her seniors wants to play in the NFL so he wants to go to college to go pro and, if he doesn't get drafted, he'll just work at Taco Bell. Nothing wrong with wanting to work at Taco Bell, but the teacher is frustrated that his vision goes no further. On the other hand, right now, he can't imagine not playing football. That's his dream. At least he has one.

These days there is a lot of emphasis on STEM, and rightly so. We do need more people in science, technology, engineering, and mathematics. However, we need them to be creative and collaborative. Personally, I think we need them to be familiar with systematic inventive thinking. I'm sure some of what they're teaching and discussing has changed from what I learned back in 2004 or 2005, and that's good. It should evolve. But one thing that was revelatory to me is that sometimes the best solution is a simple addition or a simple subtraction. It was transformational thinking in the purest sense and recognizing that transformation doesn't necessarily mean massive redesign, but perhaps one small change making a large difference in a way of doing, in a way of thinking.

Because I do a lot of work in STEM, and because of my own unusual background, I'm aware that the liberal arts are often maligned and misunderstood. I'm also aware of the concern of underemployment of those with any degree, the subject of many a report this past spring.

Traditionally, students have pursued jobs that aligned with their major; therefore, a business major looks for jobs that seem to reflect the courses taken for that major or the kind of work they think they want to do. However, it's true that one's major does not define one's career. A degree is representative of something in which a student may be interested. I qualify that because I've had my share of students who graduated and realized they had a degree in something they didn't really want to do or didn't really like.

Soft skills aren't new but they are of greater interest to employers now. And why? Well, take a look at those top skills in that graphic at the top of this post. What do you see? Anything about a specific major? Nope.

Seth Godin wanted to call them vocational skills. Meh. I think that what we call "soft skills" are life skills. We need to be active listeners and good communicators whether we're collaborating with work colleagues or life colleagues. Emotional intelligence has value outside of the work place as does, well, pretty much everything on that list. 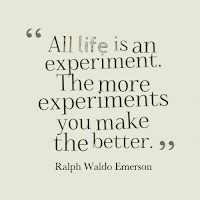 While a degree might be important for the work graduates might do some day, there are several things to consider. First, the job students get when they graduate may be on the path to their ultimate career or may be a stepping stone to get to where they really want or are meant to go. Second, some students right out of college often lack a clear sense of self and also don't really know how far they can go or what all they might be capable of accomplishing. Limiting themselves to the major on their degree might be self-defeating. Having a sense of their capabilities and their competencies might help them figure out what they really want to be doing and start them on the path to get there. Third, many of us didn't really hit our strides in our work life for a few years or even longer. Fourth, plenty of us have changed career paths more than once, and that's okay.
Posted by ejroberts at 12:36 PM