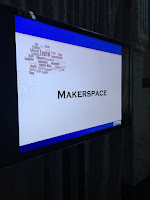 A couple of weeks ago I was able to facilitate a workshop about makerspace. Like many of us, I've been reading a lot about makerspace--how to start one, what to buy for one, etc.

We spent the morning talking about what schools are already doing, what educators think makerspace is, what parents think it might be, how students are responding to what schools are already doing, and reading some of the current articles about makerspace. I asked the participants to download a bunch of apps and we spent a bit of time in the morning coloring and playing with QuiverVision.

We spent the afternoon playing with green screen, Osmo, Makey Makey, Dash & Dot, Ozobot, Bee-Bot, Google Cardboard, and stuff. Lots of just stuff. I called that the "Figure It Out" station. I could have had several more stations but I wasn't willing to schlep or ship that much stuff, and the point was to give some of the unfamiliar a taste of what's out there. In fact, people were most excited about being able to experiment with things they've heard of but not been able to play with and then talk about what they'd already gotten and why they did or didn't like it. Perfection.

The next week I was at one of my schools and the principal was talking about the area for their makerspace in their new building. I sighed inwardly. Some of his folks had been at the workshop and they were, I'm truly delighted to say, still stoked about some of what they'd learned. In fact, a couple of the teachers were already integrating some of what they'd discussed at the workshop. That, my friends, is bliss.

My response to the principal was this, "Have you been able to talk with the team who work at the workshop last week?" He shook his head and told me they were going to share out at a faculty PD in April. Another internal sigh, but I get it: it's hard to find or make time to share new learning. And when I'm at his school, I'm there under the auspices of another organization, not my own business. But, well, I know what I know, so. . . .

I let him know some of his teachers were already doing makerspace in their rooms. I went on to say, as we walked down the hall of sea creatures made by his students, each grouping of creatures with its own "fun facts" researched and written by students, that makerspace work was already evidenced in his school. That was as we stopped to look out the window where the outdoor coop for the hatchery was being built.

He looked at me and I could see the connections being made.

We have established a bad perception that Makerspace is all about technology. That a good Makerpsace space has Raspberry Pi, arduino boards, and all kinds of coding stuff. That's not wrong. In fact, many of those resources are great for a lot of kids. Some of the kids love the coding option for Osmo while others really like the math and word games. (The new pizza company option is pretty cool, too.) Those are GREAT indicators for teachers who are paying attention to what draws their kids.

Now we've all seen those videos of kids creating prosthetics using 3D printers and that is Maker-mazing! Kids figuring out how to solve a specific problem for a specific purpose. That's Making at its best.

Then I came across a video about The Empowerment Plan and its sleeping bag coat.

And then I found a blog post about compassionate making. That was the genesis of the "Figure It Out" station. What can we encourage our kids to create to solve "right now" problems for themselves or their friends, some of which may have little or nothing to do with technology.

And then I heard a podcast with Tom Murray during which the host, Jon Harper, said that one thing he remembered and valued was a question he'd heard Tom asks his children at the end of every day: "What nice thing were you able to do for someone today?"

Now I love technology. Anyone who knows me knows I love me some technology. I'm always buying stuff so I can "test" it for my customers and teachers. Yea, right. Well, that's partially true. But I get itchy when people seem to think that Makerspace is all about technology because it isn't.

You look up the word "making" and the definition you're likely to get will read something like this:

Precisely. Look at all of those synonyms. That's why some felt or fabric, some duct tape sheets (I kid you not; I found them at Jo-Ann Fabrics and Crafts), and a glue gun could become something maker-mazing. That's why the sleeping bag coat is so powerful.

That's why the library media specialist who is talking about having sewing machines in her makerspace is right on.

That's why another library media specialist who is talking about having green fabric so kids can check out a "green screen" to take home or back to their classrooms is right on.

That's why the educator who is letting her third graders play with stop motion photography for their projects as well as using the ShowMe app to create math tutorials for their classmates is maker-mindblowing!

That's why the kid who wondered if an anemometer made as a class project was more or less effective than a smartphone app, and wondered how to test it is maker-exciting. (We'll work on that after spring break.)

If you're a classroom teacher, partner up with your library media specialist who can help you find and brainstorm different kinds of projects but don't forget how often you might already have your kids making in your classrooms even now. It's not a big stretch to take some projects to another level and realize how much more engaging that constructivist, hands-on, making learning is for your kids. And yea, go ahead and think SAMR because inviting kids to find new and other ways to demonstrate their learning definitely moves you along the SAMR scale.

Do you do centers? Some centers can be an opportunity for making. In that case, it's easy peasy to make room for makerspace because it's just a part of the learning process.

And that's my point. Making room for makerspace doesn't require a lot of stuff or a ton of planning. It might take some time because kids might need to work on some projects for more than one class period or more than one day, but that's good, too. I've seen projects where kids come back the next day, have a quick huddle, or decide to start over because they've each figured out what their project lacks and how to make it better. How freakin' exciting is that?

So whatever you do for makerspace doesn't have to be expensive or take up a lot of space. Though, yes, over time you'll need more room because you'll have to find space for sewing machines, fabric, glue guns, random stuff you collect for possible projects, some green fabric (buy it at a fabric store) for a green screen then the accoutrements you can't leave without for better production quality. That's when you'll really want to partner with the library media specialist for space for the larger and more expensive items you might not use every day. Or maybe you'll have grade level makerspaces though with agreements that allow one grade to borrow another grade's stuff should the project necessitate.

But, again, to get started doesn't have to be expensive or take up a lot of space. Buy some fabric at a fabric store for your first green screen and download Touchcast or (buy) DoInk. Done. Go to DonorsChoose to get your kinder and first grade teachers at least one Bee-Bot and the basic Osmo package (plus an iPad to go with Osmo). Download the Education Starter pack at QuiverVision.com and download the app for some exposure to augmented reality. Google Cardboard isn't expensive and a few free apps will get them interested in virtual reality. Rummage around the school and house for old shoeboxes, unpaired socks, old T-shirts, screws, nuts, bolts, etc. Buy a few mini glue guns. Ask someone to come to school to teach kids some basic sewing skills (including darning socks), maybe even some quilting or knitting skills. Maybe a compassionate maker project is to create something for the elderly or the very young in their community. Ask someone else to come to the school to show kids some basic carpentry skills: how to use a screwdriver, level and hang a picture, build something small and relatively simple like a birdfeeder.

Show students (and teachers) these BYU meets origami videos (Origami Inspires Tiny Medical Devices, Origami in Space, and Origami Ballistic Barrier) to see if and how they might be inspired about origami or other arts that could have other applications and uses.