Riding the edge of beyond: Tech trends for today and the future 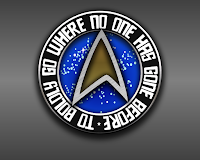 Back in the 70s a nifty band called The New Seekers put out an album titled Out on the Edge of Beyond, which was also the first track. Love the title. Love the idea of being on the edge of beyond, perhaps where there be dragons. In other words, stepping into the unknown. All right. To boldly go where no one has gone before.

Well, what prompted this mashup of media references is an article from the recent ISTE conference. If you're not familiar with it, ISTE is quite likely the largest educational technology conference in the world. It is, after all, the International Society for Technology in Education. ISTE is a conference I try to attend, but this year the respective pulls of Yellowstone and Grand Teton National Parks were much greater (pictures are available). Anyway, over 18,000 educators were at this year's conference in Denver. Most of them techno-geeks like myself, but many others just finding their ways.

ISTE and more localized events, such as EdCamp, are important for educators and not just for collaboration. However, as we share our learning, we share our insights and our perspectives for preparing ourselves for the road ahead even as we strive to prepare our students (and their parents) for their futures.

So let's get to those trends. First up: big data. My response. Ugh. Seriously. I'm so weary of big data; so weary of data and data-driven decision-making. So weary of people scrambling to aggregate and disaggregate and forgetting to pay attention to the actual student. I'm not anti-data, but I recognize we do have slews of data. So much data teachers cannot possibly figure out how to mine it all to get relevant and useful information in a timely fashion. It's one thing to have data but it's quite another to have the information you really need and can use to help kids understand how they are being successful and what they need to do differently.

Next up: augmented reality. Yes, that's here. I've seen folks trying to figure out how to make use of AR and VR, and we're on the edge of figuring out how it will matter for learning. Forget college and career readiness for now. I was at a lovely place in Cody, WY (Buffalo Jump Winery where they have lovely food and truly excellent wine) talking to a young man about a hunting show he wanted to create. He was excitedly explaining how he would use a videography buddy and a GoPro. I asked him if he thought about making it a VR experience and then I showed him a VR app on my phone. His eyes went wide with excitement. You know that look: when a kid discovers the like totally awesomely best new toy ever! Yea, that look. When I think about the kinds of differences VR could make for kids learning about the world they might never otherwise see or experience, I get goosebumps. And then I think about how kids (and, okay, grown-ups) could be trained through VR, well, the possibilities become endless.

On the other hand, there are other practical uses for VR and AR. My mother has dementia. My stepfather recently passed away, also a victim of dementia. The assisted living facility where my mother still lives has an AR experience so staff members and family members, if they're interested, can get a sense of what it's like to have AR. I'm trying that for the first time at the end of this month. I'm terrified, but I'm also looking forward to it in case it helps me better understand what's going on with my mom. Just think about the potential for that kind of application for VR and AR. Yea, the edge of beyond.

The third trend is the semantic web. The author of the article, Meg Conlan, didn't refer to this as the Internet of Things because they're not the same. Stay with me for a few. Semantic refers to language or logic. You know how you sometimes get a message about data being incompatible? That's a semantic problem. There are patents and various technologies that make sure that, for example, certain stuff that works in OSX isn't compatible with Windows 10 for proprietary reasons. And that's why there are companies that make money but creating software that helps you "translate" between otherwise incompatible formats. But what if there were bridges that made that data and content interconnectivity even easier? Well, it's coming.

The fourth trend is extreme BYOD, which sounds more dangerous than it is. I've worked with schools and teachers who spend a lot of time yelling at kids about earbuds and phones. Yikes. Kids are bringing their stuff. I've seen some pretty banged up smartphones, but kids still use them to listen to their music and text. Smartphones are a reality, people, so let's make use of them. Let them bring their phones and use their phones so we can teach them about how to use them responsibly, but also how they can use those gadgets for something we call learning. When we invite kids to download free apps, maybe a few VR and AR apps, maybe a few math and reading apps, just maybe they'll figure out ways to use them for something other than music and texting. Like creating some pretty amazing video with audio that demonstrates their learning in a way that makes sense to them. We've got to be thinking forward even as we work in the present.

The last trend is transmedia, which makes sense to me. BYOD + AR/VR + whatever other stuff we bring to the classroom and invite kids to bring to their learning experience makes it transmedia. Do I want kids to be able to write a coherent paragraph? You bet. But if they want to create a video to show me what they've learned about the different types of cells, they have to write a script. I'll take the video plus the script as their learning products. And then I'll have evidence--and data--that makes their learning and their thinking very visible. And then I'll be encouraging them to continue to develop skills in ways that promote and refine their interests.

Educators who embrace the possibilities are going to have a far greater impact on students. I'm not saying we get widgety and tech-focused for every single lesson for every single student. There are some more old-fashioned strategies we may have to employ for some skills and for some lessons. But integrating technology in pure, seamless, and meaningful ways has got to become a higher priority for many of our teachers.