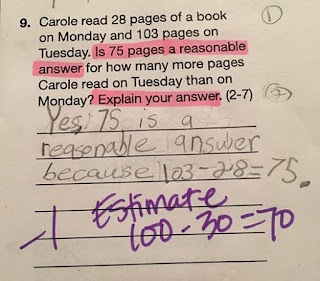 Now I'm guessing a teacher was trying to align the question to a standard relating to estimation. I think estimation can be a tough skill for kids to learn and this question, perhaps written because of a teacher's anxiety to test standards-based skills, doesn't help the teacher measure that at all. 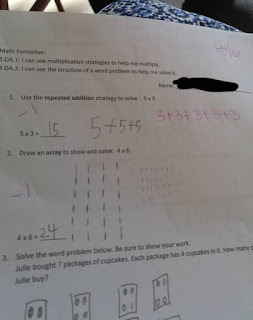 The problem with the problem to the right is one that really irks me. My interpretation, based on only the document, is that the teacher taught students how to group a particular way and was looking for that answer. Is 5+5+5 the same as 3+3+3+3+3? By my math, yes. Is the answer wrong? No. The teacher offered no rationale for the "correct" response though it's possible that was discussed in class when the results were returned.

I'm not holding my breath.

As noted in the article about "insane math problems,"


While both topics, estimation and repeated addition, are part of the Common Core standards, Common Core does not have a standardized way teachers are supposed to teach them.

A lot of teachers and administrators know that the Common Core standards provide guidelines for what students need to know and able to do. There are no activities, no teaching strategies.


The Common Core is not a curriculum, it's a set of standards student are expected to meet to help close achievement gaps and prepare them for college and the workforce. . .The way the teachers put in place curriculum and meet those standards is entirely their own.

When I worked for Pearson Education Teacher Education & Development Group and for ETA Hand2Mind, I had conversations with principals and with math teachers who were pleading for help to learn how to teach and assess math well.  Pearson was before Common Core and ETA Hand2Mind during the heady first few years of it. But I also recall teaching Basic Math at the collegiate level and having students who struggled with fundamental math skills, notably in fractions with corollary challenges with decimals and percents. Based on work I've done with teachers and administrators since then, those challenges remain. Too many teachers who are responsible for teaching basic math skills are not that adept at math themselves and rely on ready-made lesson plans and assessments. If a kid answers a question in an unexpected way, the teacher hasn't sufficient content knowledge to be confident if the answer is correct or not, and why or why not.